An interview with Ángel Pascual 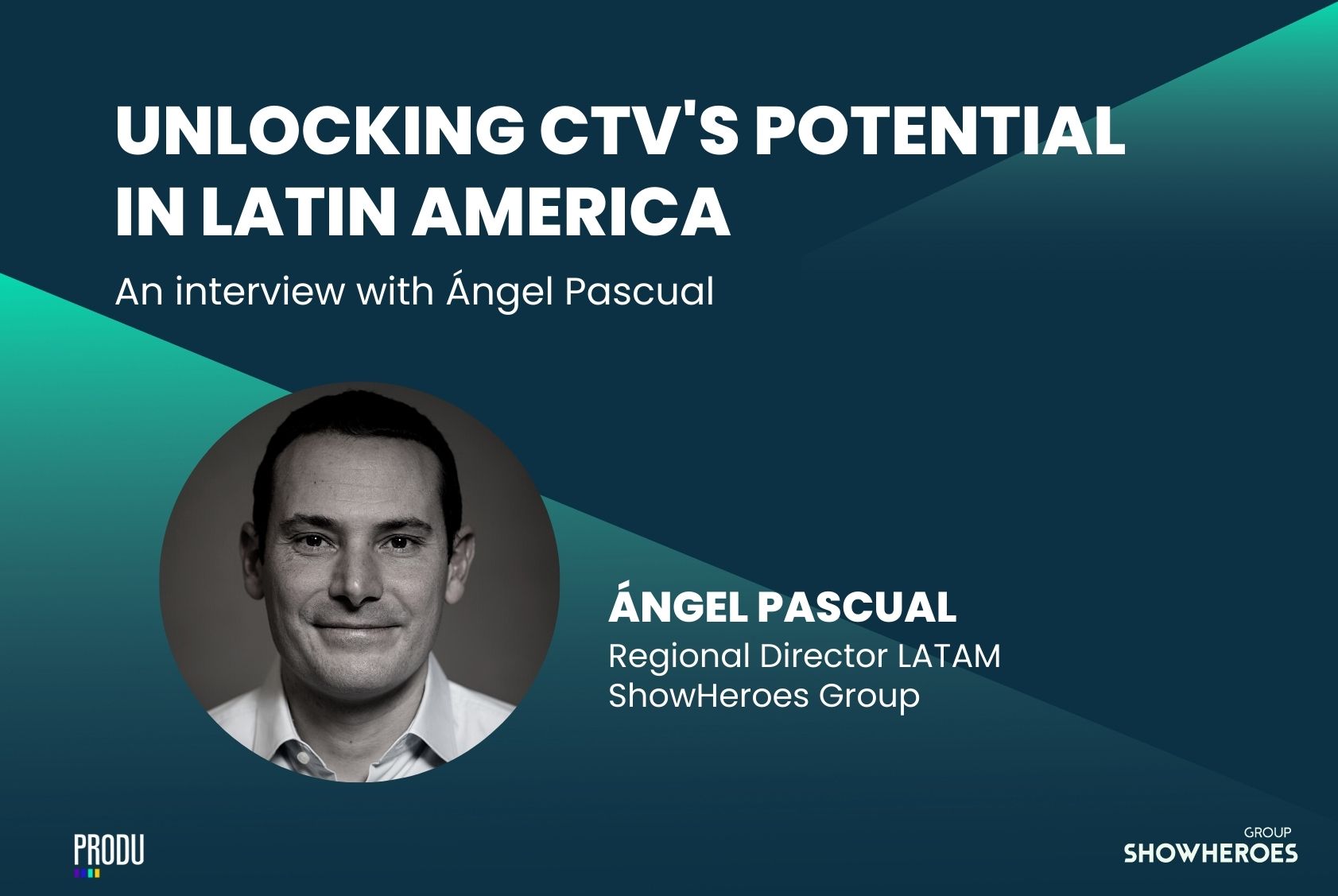 Ángel Pascual, regional director for Latin America at ShowHeroes, points out that football fans prefer to watch sports on Over-The-Top streaming devices such as CTV, second only to linear TV. A 2021 Smartclip study revealed that users tend to consume CTV mostly in the company of family and friends, meaning a single CTV campaign impacts more than one person at a time. We spoke to him about what that means for advertising during the World Cup and in Latin America in general.

1. The World Cup in Qatar is finally here. What do you see as the main opportunities that brands can take advantage of when it comes to connected TV advertising formats for the event?

The World Cup in Qatar is undoubtedly one of the most eagerly awaited sporting events in the world, especially in Latin America. This year countries such as Mexico, Brazil, Argentina, Ecuador and Uruguay will represent the region. Regardless of the fact that not all countries have been able to qualify, the event continues to be a meeting point for football fans of all stripes. Chile, for example, according to a 2018 Nielsen SportsDNA study, is the third country in the world with the highest proportion of people interested or very interested in football, 75% of respondents! In fact, another Nielsen study in 2022 states that football is the most popular sport in the world.

Marketers might wrongly assume the sporting event has higher interest from male viewers. The same Nielsen study reveals that women are more interested in the World Cup than in any other sporting competition. Another interesting point is that football fans, after free-to-air TV, prefer to watch sports on Over-The-Top streaming devices. According to a study by Smartclip in 2021, users tend to consume CTV mostly in the company of family and friends, so the same campaign impacts more than one person. These elements make up a great showcase for brand advertising campaigns in an enthusiastic context that reaches various target groups.

Within the options offered by Connected TV, there are many formats that can drive advertising campaigns. 67% of fans think brands are more attractive when involved in sports sponsorships, and 59% of football fans will choose a sponsor’s product over a rival’s if the price and quality are the same. World Cup sponsorships are generally very expensive, but there are CTV formats that make it easier for users to associate brands with the event.

Thanks to ShowHeroes Studios, our creative in-house production branch, we can create content related to the World Cup to achieve this goal. Through Native CTV, for example, non-sponsored content is shown before the advert to allow the user to consume the advertising in a more natural way. This content created by us can also be sponsored by the brand from the beginning, in the form of Matched Content. Both formats make the ad more user-friendly, so it is a good way to take advantage of the benefits of this event.

Other ways to engage with the FIFA Cup are through QR code formats, such as “Save The Date”s or countdowns. For example, brands can remind users to schedule specific matches or remind them how much time is left until the next one. Through these formats brands can become part of the event, thus enhancing brand recall. QR codes are useful in other contexts, too – consider that 68% of people order food at home while watching football matches, which is ideal for fast food delivery brands.

2. How can advertising investment in connected TV formats be boosted in Latin America? Why should brands look for opportunities there?

Unlike other online formats, CTV has the particular advantage of being consumed by users in relaxed, ‘lean-back’ environments. That is to say, in general, when people watch CTV they have the time and willingness to consume content, so they are more relaxed, predisposed, and perceptive when exposed to advertisements. This is not the same for other digital channels. For example, online ads often compete against many other stimuli and the limited time users have when surfing the web.

This is not to say that it is not an efficient channel to place ads, but they have different aims and objectives. CTV is a great opportunity to promote videos that are focused on delivering a more direct message. The non-skippable functionality means that the user can see the ad in its full length and full screen, so the impact is greater. A tip for the ad to have even better reception is that it should not last more than 30 seconds, as we must not forget that the user consumes CTV for the free content, so advertising should not be too invasive for the user to take it in a good way.

Another important point is the growth of AVOD platforms such as Pluto TV, which now has 72 million monthly active users worldwide. The platform has become the first ad-supported free service to account for a significant share of the audience, so much so that it was incorporated into Nielsen’s monthly ratings reports.

On the other hand, the arrival of new AVOD services competing with Pluto TV such as Vix and Xumo show that the industry is growing. Even platforms that were historically 100% subscription-based are opening up to hybrid models that allow advertising to lower or finance costs for users, which signals competition in the market, and competition is always good as it improves the quality of services and prices.

3. Which countries in the region are implementing best practices in this area?

We firmly believe that as advertisers become more educated about this product, they will become more and more interested in being able to take advantage of it. Why? The pandemic has changed the way we consume audiovisual content. If Netflix was popular before, the pandemic caused it to boom, and along with it come more Video On Demand platforms.

The possibility of consuming content when people want it has created a great advantage for these platforms over traditional television. In fact, a study we did this year together with IAB Mexico shows a projection that by 2025 the percentage of advertising spending on Digital TV will be 62.6%, versus 37.4% on traditional TV. Unfortunately, users’ budgets are limited and, in many cases, it becomes difficult or generates disinterest to subscribe to the myriad of paid platforms that exist today, especially considering the economic scenario projected for 2023. According to IMF projections, all Latin American countries will experience an increase in inflation next year, so these services could become more dispensable.

This does not mean that users will abandon this new form of consumption. This is where AVOD platforms gain advantages and become attractive options for users.

4. What do you see as the main challenges for CTV in Latin America?

There are many challenges ahead as we enter 2023, an important but seemingly basic one is to be clear about what we mean when we talk about CTV. The way we watch TV has changed: In the beginning, traditional TV was very popular and was measured on panel-based solutions, which gave robust information on how to measure and market TV ads but were limited to traditional linear consumption. With the advent of set-top boxes a level of addressability and targeting at device and household level was achieved, but was not yet well developed. Then, with the advent of smart TVs and other connected devices that allow TV to be connected to the internet, viewers have taken control of deciding not only what content to watch, but also when and with whom.

In this context, it is well understood that connected TV is a different channel for advertisers to better leverage their campaigns, but due to CTV being “connected to the internet”, many people still tend to think that it is possible to measure their results in the same way as other online platforms.

Without getting too technical, from a viewability point of view OTT applications were not designed to allow for outsourced measurement scripts to avoid risks associated with the user experience, so those forms of measurement are not compatible with connected devices.

Another important challenge for the industry is to clarify and verify that reporting is considering the metrics of ads that were actually shown from the CTV device and not from other platforms. This is inappropriate in the sense that, as I mentioned before, CTV objectives are to leverage the experience of a full screen in full view while impacting more than one user in a more relaxed environment, all features that are not leveraged from other devices, so the campaign may not have the same impact.

Fortunately nowadays, there are verification and auditing companies that accredit and validate that certain campaigns were viewed from CTV. We at ShowHeroes partner with these companies to audit ourselves externally in order to make the results transparent to clients, guaranteeing metrics above the benchmark.

Finally, as CTV continues to develop, so the market continues to push for improvement in standardized measurement to generate more confidence in advertisers. It is critical to understand the capabilities currently available in each market.